Goddess Tara will help you to cross over the ocean of confusion: 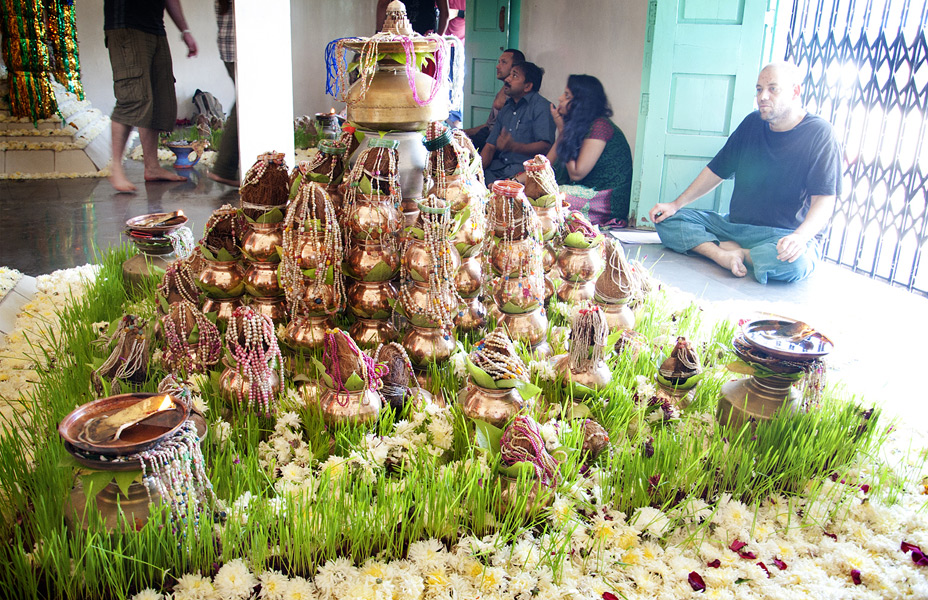 Do you ever feel that despite all the efforts in growth and evolution,

you find yourself swimming in the same, or at least similar muddy waters?

The fears you courageously overcame about not being enough (or too much) creep in again?

The judgments you compassionately dissolved about how your life should be, pop up again?

After years of sadhana and inner work, I keep finding myself in these spirals up and down wondering where I am truly connected and where tainted by my deceptive reality.

That brings me to Guruji`s profound words: Life is not a race, It`s a journey. It`s not about competing, it`s all about exploring.

We are yet reaching another powerful time of the year to go deeper into our exploration. Navratri is coming up on 2-12th of April; the Festival of Nine Nights. It is the time when positivity wins over negativity; the great Shakti slays Asura, our inner demons after 9 nights of battles. What better way to describe the inner journey to the depths of our hearts?

We will be invoking Maa Tara; the Great Goddess of wisdom and compassion, the north star illuminating the path across the ocean of confusion, our ego-mind. You are more than welcome to join this sadhana with a special mantra transmitted from Shivoham Tantra.

First some background on these auspicious times…

According to Guruji Maharaj, different Navratris or events are energetically interconnected and play a vital role in managing the cycle of The Universe. The starting or origin of the energy begins from the first day of Chaitra Navaratri.

Ultimately, the celebration of Navratris depends on the variations of beliefs and traditions from different regions and sampradaya; lineages.

Let`s dive deeper into the significance of the one coming up right now! The upcoming Chaitra Navratri energy zone determines the beginning and functioning of the Nav Varsha; the new year. According to Guruji Maharaj, this auspicious event brings Dhanatmak Urja, which is the addition of positive energy, abundance, growth, and prosperity for all the living species of the universe.

Chaitra Navratri is nine days 10 nights festival which starts on the first day of the Hindu Luni-Solar calendar and falls in March or April as Chaitra is the first month of the Hindu lunar calendar.

At Rajrajeshwari Ashram – Shivoham Tantra we worship Dus Mahavidhya (or Dasha mahavidya) during the Navratri festival. Dus Mahavidhya is the 10 divine cosmic superpowers which are considered as Aadya or Adi Shakti i.e the first to inhabit. The 10 Mahavidhya are incarnations of Maa Parvati which follow as Maa Kali, Maa Tara, Maa Shodasi, or Maa Tripursundari, Maa Tripur Bhairavi, Maa Bhuvneshwari, Maa Kamala, Maa Chinnamasta, Maa Dhumavati, Maa Baglamukhi, Maa Matangi. There are different stories written in the literature about the origin of 10 Mahavidhya.

The story goes that Maa Parvati portrayed a character carried away by her Ahamkara, ego believing that Shakti is the most powerful and complete in itself to function the universe. Lord Shiva then took the forms of 10 Mahavidhyas to prove that Shiva and Shakti are undivided and Shakti is also an inclusive part of Shiva. He gifted those 10 energies to Maa Parvati by saying that these belong to you as you and I are one.

In another story, it is said that Lord Shiva was upset and wanted to go out of Kailash but Maa Parvati didn’t want him to leave so she takes 10 different forms and stands in the 10 directions of the Kailash. By seeing her determination and love Lord Shiva was amused and he gave her a boon that she will be the energy who will be 10 directions governing the universe and will be the 10 paths to reach Lord Shiva.

According to Guruji Maharaj; 10 Mahavidhya are the medium to receive the divine cosmic energy from the eternal source Lord Shiva. Lord Shiva granted the knowledge of tantra as a sacred path to achieve liberation; a chance to connect with the knowledge and purity of the universe. It is only possible when one connects themselves with the Prakriti, who is Maa Parvati. 10 Mahavidhya are the Tantric manifestation of Maa Parvati. Hence according to tantric traditions Guruji Maharaj guides sadhak/tantriks to worship and practice tantric rituals related to 10 Mahavidhya during the energetic event of Navratris.

Each Navratri Guruji Maharaj receives the information about which out of 10 cosmic energies to worship through his mystic Guru Bhairavananda. Accordingly, Guruji Maharaj guides his disciples with the complete tantric process which includes Yantra, Mantra, Yagna, and other auspicious rituals like Kanya Pujan, Reciting of Tantric Script – Stotram, Kavacham, Shahastranamavali, etc.

Guruji Maharaj also makes it possible for the people who are not sadhaks to connect with the energy by guiding them with the simple Mantra practice.

You can simply join our Facebook group for benefiting from these powerful sadhana processes.